Would You Like Fries With That? : Coping with Reverse Culture Shock 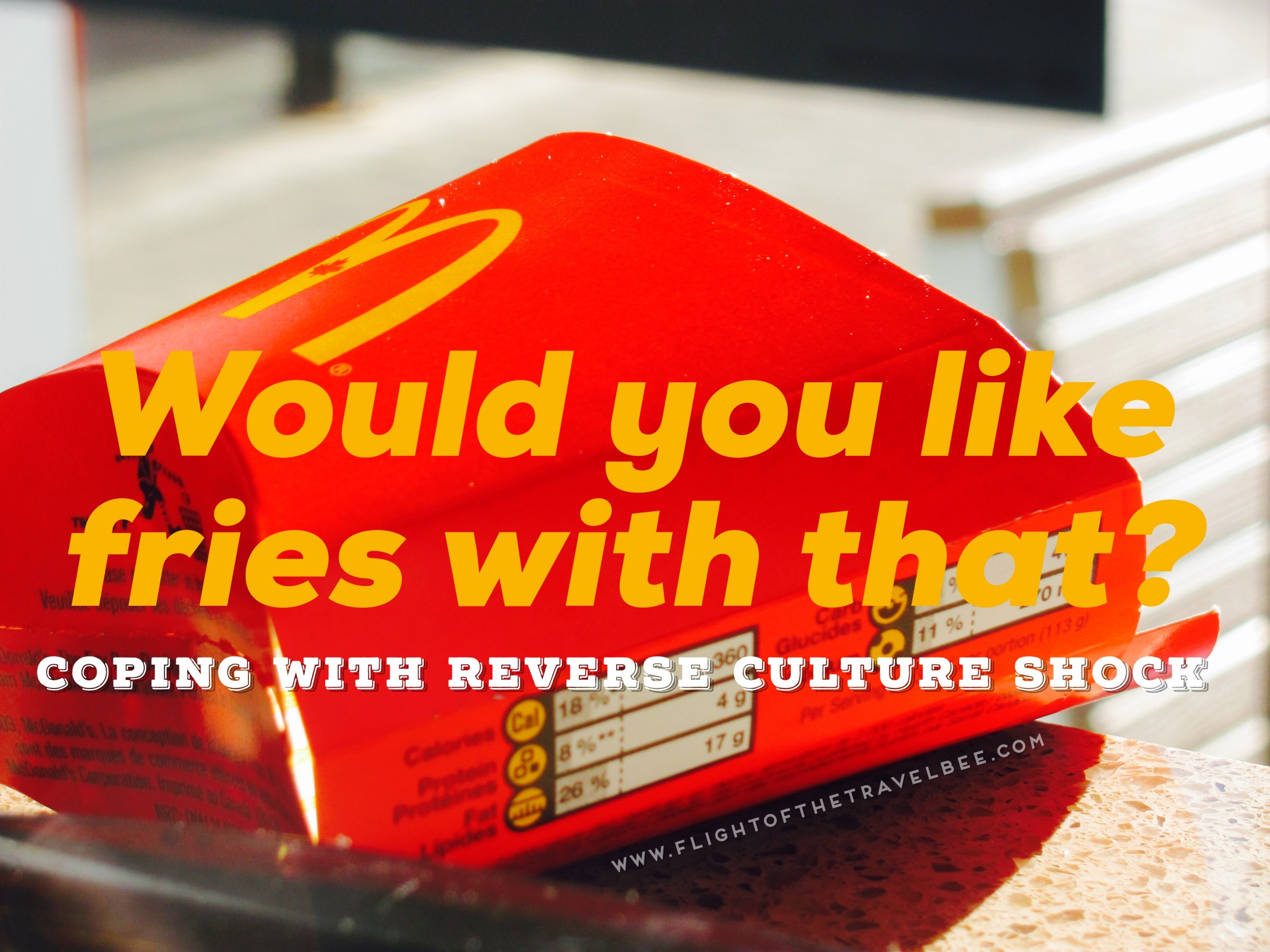 Photo via pixabay. Art editing by The Travel Bee

“Hello, how can I help you?” the woman behind the counter said in a perky voice, she was a tall woman in her twenties with her long blond hair pulled back, tucked underneath her visor hat. I ordered Chicken Nuggets, and she asked me “do you want the four pieces, six pieces or eight pieces, or were you referring to the chicken selects?”

“What is the difference?” I asked her, and I was told that the chicken selects were made of a different type meat, crispier and a bit bigger than the regular chicken nuggets, and they came in selections of three or six.

“I just only want a four piece chicken nuggets please”

“Ma’am, what dipping sauce would you like with your chicken nuggets?

“Uh…. What do you have?” I answered back to the lady behind the counter. Without skipping a beat she quickly replied “Oh we have five choices, Honey Mustard, Chipotle, Ranch, Sweet and Sour, and Barbeque, which one would you like? We also have Ketchup, if you want…”

Flustered, and dazed with all the choices offered, I stuttered “Uhh…Ranch, no Barbeque, no Honey Mustard.. noo.. (sigh)… just give me the Barbeque”

“Coke”, finally something simple, I confidently replied back to the lady behind the counter. “Oh do you want Diet Coke, Coke, or Coke Zero?” Then she continued on, “and will that be a small, medium or large?”

“Medium, uhh.. Coke Zero?” I was flustered again, and frustrated with the complexity of this order had become. It was McDonalds for crying out loud, when did it become this difficult to make a single decision?

In Beijing, China you could only make out what was on the menu by looking at the pictures on the large overhead screen behind the counter. Pointing to the burger as you order, there are no dipping sauces other than Ketchup. None of the “Healthy” choices were offered as they do back in the States, no five dipping sauce choices. As for drinks, it was Coke, Water, and something else. But back in the states, you have the option of Vitamin water, Lemonade, Coke, Diet Coke, Coke Zero, Cherry Coke, Arnold Palmer, Dr. Pepper, or Root Beer. I never knew that the Golden Arches would be so incredibly overwhelming when I got home.

I was dealing with a huge “Reverse Culture Shock”, a syndrome coined by travelers for those that find transitioning back to real life difficult. I couldn’t understand why I felt so disconnected from home more than ever, I felt as if I was a foreigner in my own country. After awhile I became isolated, and lonely- no one seemed to understand what I had been through and my friends were miles away. “Why am I feeling this way?” I constantly thought to myself, telling myself to knock it off and just be happy. Don’t get me wrong, I was happy to be home, to be with my family, my dogs, to be in my own bed, in my own room after so many months away. However, days turned into weeks, and weeks turned into months and I still couldn’t get myself to snap out of it. Post Semester at Sea (SAS) depression took over; I was completely and irrevocably lost.

Last fall, I moved to a completely new town to start my first college semester at Boise State and spent it focusing solely on school, Semester at Sea prep and helping my mother recover from her battle with cancer. Then I left in my second semester of college to participate in Semester at Sea for three and half months to study on a ship around the world. Onboard the ship everything had a purpose, a routine, and I belonged.

Yet, home felt strange. The chance to familiarize myself with my new home in Idaho never presented itself. For the first time in months I stayed in one place; and I didn’t like it one bit. I have had my share of unfamiliar places and but it was quite unnerving to be back in the states. It is easy to say that I was dealing with a heck of a lot in the months leading up the disembarkation date. For months on end I was entirely consumed with thoughts of what I had to get done in order to go, that I barely had a second to think about what would happen AFTER.
What now? I quickly realized my mistake of not coming up with a game plan post Semester at Sea; no summer classes, or any work; nothing was lined up for me for when I returned. To go from an extremely fast paced lifestyle to a complete standstill had a crippling effect on my life, to the point where I just stopped working altogether. I was completely overwhelmed with the culture shock, that even grocery shopping proved to be stressful and unpacking would mean that it was really over.

I missed my friends that I made on the trip more than ever; the tight shipboard community during those three months had become my second family. I loved teaching Sign Language to everyone who wanted to learn, I missed the spontaneous “unofficial ASL Club” that was created after a group of friends asked to learn several signs. It sparked a weekly meeting, whereas my friend Tee and I would teach signs to a large number of people. I even miss the challenging, exciting thought provoking classes on board. Especially Travel writing class in which was taught by Professor Kluge, a critically acclaimed novelist and world traveler- I always thought of him as a snarky cooler version of Anthony Bourdain. I always found myself improving on my works, being challenged on articles, and I loved hearing the feedback from my peers on my works- good or bad…

Breakfast, Lunch and Dinner were ready on schedule, the beds were always made every day after class, everything ran like clockwork. I hold the utmost respect and admiration for the crew that ran the ship- they deserve recognition and praise. I would head back in to my room and just revel in the marvelous lifestyle that we were all living in. I would shake my head incredulously with the thought that I was actually on a SHIP traveling around the world, with amazing peers and respected professors that I couldn’t believe that any of it was real. I still have moments thinking if it was all a dream. It was hard not to be spoiled, or to get used to that lifestyle but I loved every minute of it. The world was truly my oyster. Every day after class, I would walk outside in the fresh sea air and bask in the sunshine; that was my campus for a semester.

Now that I am home I now have to make breakfast, lunch, dinner, and my bed is always unmade, I don’t get to walk down the halls to chat to all of my friends right outside of my doorstep. I have to do my own laundry, my own dishes, pay my bills, and I will have to bike over the course of 10 miles to get to class rather than walking upstairs to classroom two. My first load of laundry upon coming home, I managed to turn a load of whites into pinks. The most cliché thing that could ever happen did. I forgot how to do the simplest of chores, and struggled with it for the first few weeks of being home. Even watching “Saturday Night Live” with my family turned a bit of a chore itself, I was constantly lost watching reruns of episodes that I’ve missed. I never got any of the pop culture jokes, and constantly had to ask my family to explain, to which after a while, their normal response became “It happened while you were gone, long story”

“Reality Bites”, the term ever so apparent stuck in my head.

Then I had an epiphany because of an article titled “What Goes Around Goes Around” by Lisa Lubin. The article spoke of how you are more mentally prepared for countries such as India, Ghana, South Africa, China, and so on but you never really think of how big of an impact it really is once you are home. Upon reading the article, I finally understood why I was acting the way I was. That it was normal to feel this way, and that I really needed to snap out of my post SAS depression. Somehow the floodgates started to open, all these thoughts and words started to pour out of me and onto the computer screen. I was writing- something I had not done in months, I had not posted a single thing on my website until now. Lubin helped me realize the fact that I was not ALONE in feeling this way.

I realize now that time heals all wounds, all frustrations and anxiety that I may feel will disappear eventually. While I miss shipboard life, the constant traveling, and my amazing friends I realize that all things come to an end and in this case a three and half month journey around the world has been over for a while now. But the memories stay fresh in my mind, I am so incredibly thankful to have been a part of an experience of a lifetime. To travel the way I did, to be in incredible company, and to see all the things I have seen in my time abroad.

My advice to the upcoming voyage of Semester at Sea, no matter how overwhelming it may seem DO think of a game plan for when you return home. Enroll in Summer school, maybe even a family vacation, work, anything that keeps you involved and preoccupied. You will feel pangs of nostalgia, homesickness for the MV Explorer, you will miss your friends, but as I have learned, there are reunions constantly, near and far. Trust me. To future voyagers, and to current alumni, always keep in mind that you are part of a very exclusive club that maybe less than one percent of world has participated in. Feel lucky and blessed that you have been a part of an amazing experience. I mean after all who gets to live on a ship and sail around the world, and call it studying abroad?

I write this article in the hopes of helping those to cope with the simple phrase such as “Would you like Fries with that?”

Out With The Old And In With The New..

Sail Away With Me..

Thanks for the interesting and insightful article =) It’s true. There is reverse culture shock, especially if you’ve been away for a while! Welcome back!

I can certainly relate to those feelings of being overwhelmed. After two years in South Korea I went to the States with my (then) girlfriend and almost exploded for all of the choice at my disposal.

I don’t know if I’ve asked before – what part of Idaho are you in? That’s where I spent my time while I was in the US!

Reading your post reminded me of all the feelings I felt when I came home from SAS. It was really so hard… I was edgy and ready to explode any minute. I was sad to be back to my reality…. but then I started writing. Writing gave me an outlet to flush out stories that inevitably, I couldn’t tell because people only listened for so long. It enabled me to figure out who I was in the context of my new perspective. Thanks for your great post… 3 years after my trip, it was refreshing to look back..