“The games afoot” Robert Downey Jr. characters remarked in the new Sherlock Holmes flick; Directed by the ingenious Guy Ritchie (Snatch, RocknRolla). I would have never known what exactly were being said if it weren’t for the Rear Window Captioning. To explain, it is a text display bar that spells the captions in reverse, it is mounted at the back of the theater. However, there is a transparent reflector that inserts into a cup holder. It is flexible so one can adjust it to see the captions that are displayed at the back of the theatre. It is the same as if one wrote on a piece of paper backwards, and put it up towards the mirror. In the mirror the word would be spelled out correctly because of the reflection. It is portable, easy to use. However, it can be a bit pesky seeing that you have to adjust it every time someone walks by and moves the reflector. Make sure when purchasing the ticket to ask for showing that is playing with Rear Window Captioning, and pick up at the device at the front counter. To get a better understanding, refer to the picture below. 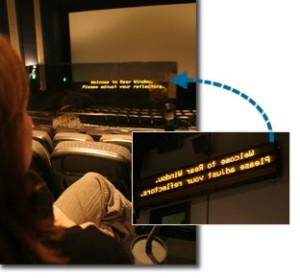 It is an ingenious invention that helps out so many Deaf people who want to experience the movie-going experience. However, there are some cons that I thought I would point out. In hopes that it will raise awareness as to the movie- going experience isn’t quite as accessible to the Deaf population as one would think. I have only seen this device at AMC theatres. AMC theatre is quite popular, however for me to see a movie I have to drive 30 to 40 minutes as opposed to driving to the local theatre which is a mere 10 minutes away. It is frustrating. There are only 160 theatres in the US that actually has the device, which is good however I think more should be installed in theatres OTHER than only AMC. It should be installed in local theatres, Edwards Cinema, and the list goes on. Another problem that I constantly run into is. Only ONE movie plays at each theatre with Rear-Window Captioning. I do not have the choice to say, I think I will watch this movie instead of the other. I have to search out for an AMC theatre hoping they are playing the movie I want to see with Captions. And they only allot a certain time period in which they would play the captions, which is usually one week. I found out that they were playing the New Moon: Twilight movie with Captions a little too late, I had to be out of town for several days, and would not have the time when I got back to watch it. They continued playing the movie for several weeks, but only one week was with Captions. Needless to say, I was bummed and frustrated that I missed my chance to go to the theatre and watch it WITH captions.
Don’t think that Rear Window is the only option for the Deaf; they also have Open Captions which are like subtitles only on the big screen in the theatre. But those are hard to find. Usually it is out of the ways for me, so if there is a movie playing with Open Captions, I have to find a certain theatre that actually plays it, and drive considerably far just to see a movie.
While I am glad they are actually progressing forward with new technology, I have high hopes that more theatres will be more accessible for the Deaf. I also hope to see more of the Rear-Window Captioning in the future, and in other theatres besides AMC. The movie was quite brilliant and fast paced. I loved every minute of it, and I understood every minute with the Captioning Device. Without it I would have never been able to understand a word that they were saying. Ten years ago, I always had to have my family members or friends translate what is being said and because of that I missed so much. Technology has come a long way, and I look forward to the next big thing in the Deaf world.

“Everything is Illuminated” by Jonathan Safran Foer

Great article regarding the things so many of us in the hearing world take for granted. With the way technology is advancing it would be terrific to see this area advance as quickly. Especially since 2 in every 1,000 people are deaf and 7 in 1,000 are hard of hearing. That is money being lost out there in a already hurting movie going industry. If anyone out there is listening……it is a win win situation!

Wow, I learned something today … It would be nice if more movie theaters offered it. Hopefully in the future. =)

Great post. I once tried programming a talk to text computer application that would be able to be used in lecture halls, etc. to show (on a mobile device) what was being said by the instructor via a direct feed and broadcast signal.

The talk to text tech and my programming abilities didn’t allow it to get very far, but it’s only a matter of time now that there are so many dictation applications out there that work much better than they did 10 years ago.

I’d be surprised if there aren’t such things already in the early phases? As you said, hopefully they’ll become more widespread quickly.