Forget everything you think you know about Boston, the Colonial Times, and the American Revolution. The truth is, what you have learned in High School pales nothing in comparison of what really happened during that time. Now, the after you have cleared your mind; I suggest you pick up a copy of David McCullough’s novel John Adams or if your pressing for time just simply watch the HBO miniseries John Adams. Both gives you the real in depth look of what really happened during that time, I was amazed to learn that I KNEW NOTHING! Everything that I assumed, thought was all completely different than what actually happened! Did you know, for instance John Adams was a lawyer and he actually defended the British Soldier in the Boston Massacre incident. I also discovered that John Adams was actually part of the founders of the constitution, he worked diligently on it and eventually became the second President of the United States. Things like that surprised me, how did I not know any of this?! What I was taught in High school was minimal to my new found knowledge. Boston is also the town where you will find a lot of familiar sights, such as the Old North Church. “One if by land and Two if by sea..”the quote from the poem by Henry W. Longfellow marked the historic event, and that event was the “Midnight Ride of Paul Revere”. You will also find the Freedom Trail, Bunker Hill, and the famous Cheers Bar (made famous by Sam Malone from the television series Cheers). Tours are provided of course, if you chose to wander around aimlessly you will not be disappointed, nor you will be if you decide to go on a tour. There are two types of tours in Boston; The Walking Tour and The Duck Tour. The Duck tour? you may ask. What it actually is, a tour by a old fashioned W.W II Amphibious Landing Vehicle, it takes you to all the memorable sights and the cool thing is it actually turns into a boat! Where you float along the river in Boston, taking in the magnitude of the city. Yes you did hear me right, the vehicle TURNS into a boat… If you ask, they give discounts for the Deaf! Be sure to ask for available discounts!

Boston is truly a place not to be missed! 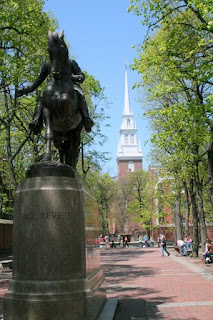 The Big Bang: Fourth of July 09

Just a girl in Fresno.

On the Town in New York City

A New York State of Mind- getting ready...

Did I FALL for it?