Quirky & Offbeat things to do in Bangkok, Thailand 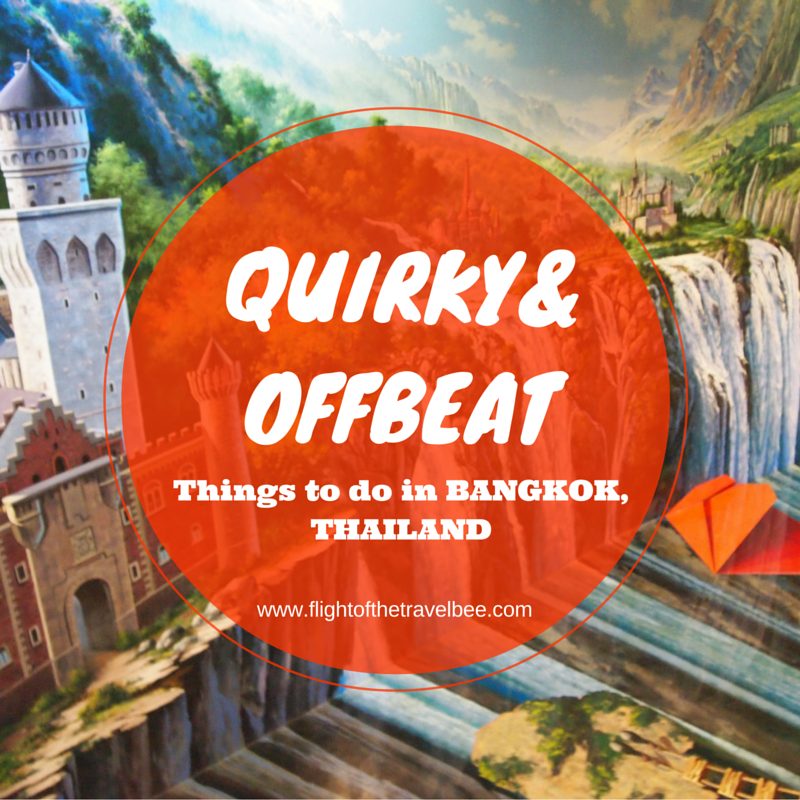 Puzzles, art and off-the-wall locales appeal to me; so when I was given the opportunity to explore the quirky side of Bangkok, I couldn’t pass it up. I truly fell in love with the wacky side of the city. So if you’re like me, then you will surely enjoy the bizarre, outside the box things to do on your next visit to Bangkok. 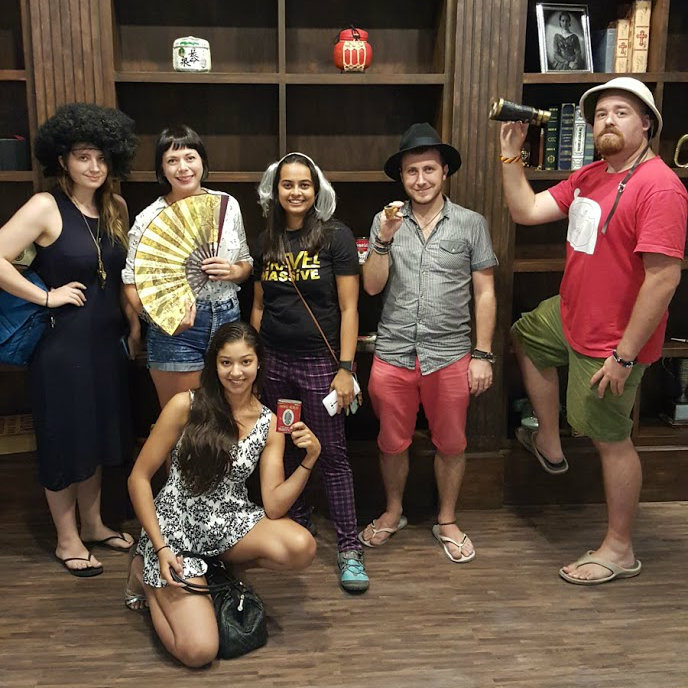 We survived the Escape room!

Trying on my best Carmen San Diego imitation, I raced against the clock with other gumshoes, Terrill (my best friend from high school), Chris from Aussie on the Road, Brendon of Nerd Travels,  Alice of Teacake Travels and Rutavi from Photo Katha.  Since there were six of us, we split up into two separate groups – Tee and I snatched up Chris for our team. Carmen Sandiego was my idol – the way she would jet set around the world solving mysteries. Even though I knew it was only a game, but I’ve always wanted to solve a mystery abroad and I finally did in Bangkok, Thailand.

We were shut into a small room, painted in old Victorian London background.  Overhead, a medium sized screen counted down the seconds in big bold red numbers giving you a sense of urgency as the seconds dwindled down from sixty minutes. Sifting through the clues, crawling through various rooms as you solve the puzzle as who Jack the Ripper is was thrilling.  Boasting our record time of solving it in half hour, we grew confident as the other team were still in the second escape room set in post apocalyptic year of 2035. However, when it came our turn – we quickly began to see how difficult the second room was. A hour went by, and we were still frantically figuring out the clues, thankfully we could request a hint from our host Valentino.  Alas, Ghost Tower bested both groups, which goes to show you the level of difficulty each room has. I look forward to trying out the other themes such as “Masamune Japan 1735”,  “Bohemian Paris 1900’s” and the “Burma Express 1965”  the next time I visit Bangkok. Enter at your own risk if you dare to try to solve the mystery of Jack the Ripper, and before the ghosts get to you…

In order to get there, it is on the 3rd floor of the Gateway Ekkamai Mall, by the corner of Sukhumvit Soi 42. Easily accessible via the BTS, get off at Ekkamai station.  You can also take motorbikes, tuk tuks, and uber if you prefer.
Cost for one game is 800 baht, which is roughly $22 USD for one hour.

Disclaimer: I was offered two games to try out “Ripper London 1888” and “Ghost Tower 2035” as a courtesy from Ticket to Mystery.  But all thoughts and opinions are my own.  On a side note: if you have a history of claustrophobia, it might not be the best idea for you. 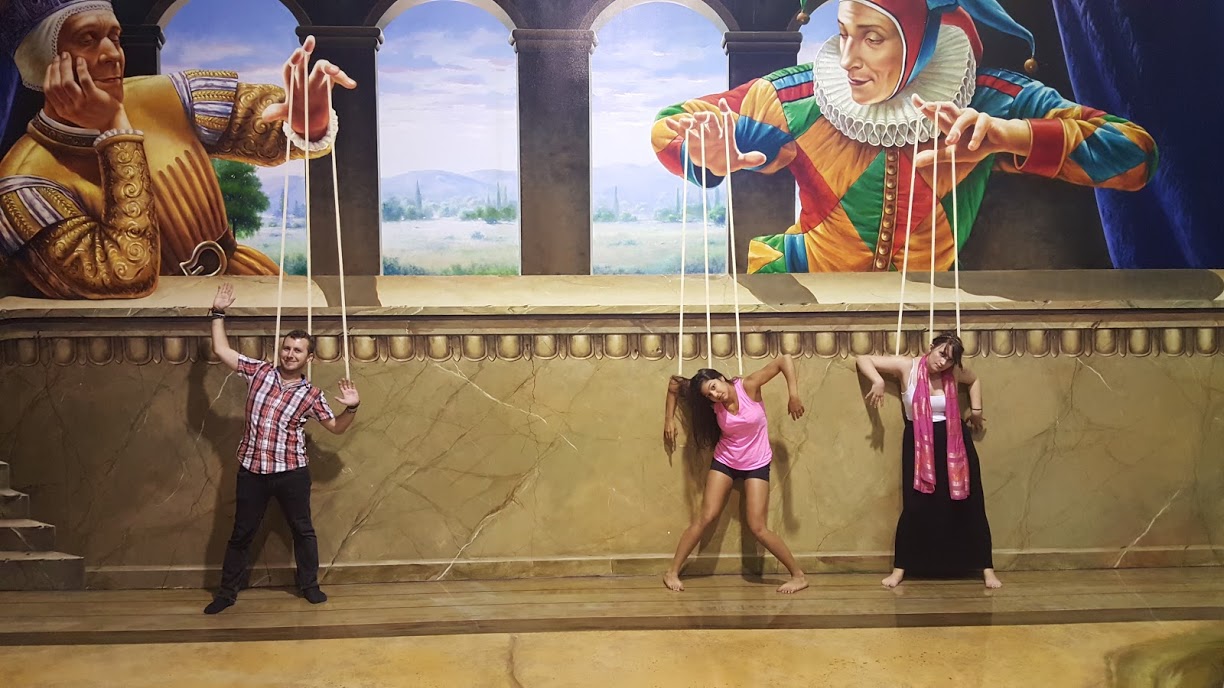 No Strings:  Left to right, Brendon, Tee and I.

Most museums discourage visitors to take photos but this one actually encourages you to take photos of art.  Brendon of Nerd Travels invited Tee and I to attend the Art in Paradise exhibit,  having studied art history so naturally I was intrigued.   With little markers on the floor allows visitors get the best 3D effect out of their photos.  With it’s realistic art murals on the walls it was as if I was transported to the land of imagination.

With large kittens, under the sea, and jungle themes it is quite fun to act out different adventures with art that is sure to boggle the mind.  I was quite fascinated with the amazing quality and illusionistic art that seemed to transform right before your eyes. Acting like children as we giggled as we walked through marveling at the creativity displayed in each room. With our wide eyed enthusiasm we would take snapshots and laughed at the notion of fighting off sharks, playing puppetry or landing on the moon. If you want to get in touch with your inner child, I would highly suggest escaping to the magical world of Art in Paradise.

There are currently three different locations, in Bangkok, Pattaya, and Chiang Mai. Also note, you will have to take off your shoes to visit the exhibit. Flip flops are encouraged, as they are easy to take off and store them in the closet.

Getting there: Bangkok – MRT Thailand cultural center station ESPLANADE 4F. The museum is on the top floor of the center, it can be tricky to find but once you find it – it is worth it. 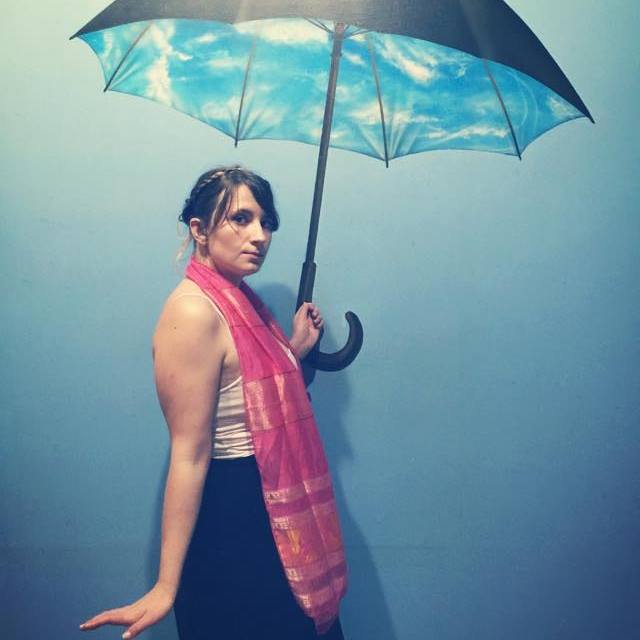 Stay tuned for the photo essay of Art in Paradise.

Get a Massage by a Blind Masseuse at Perception 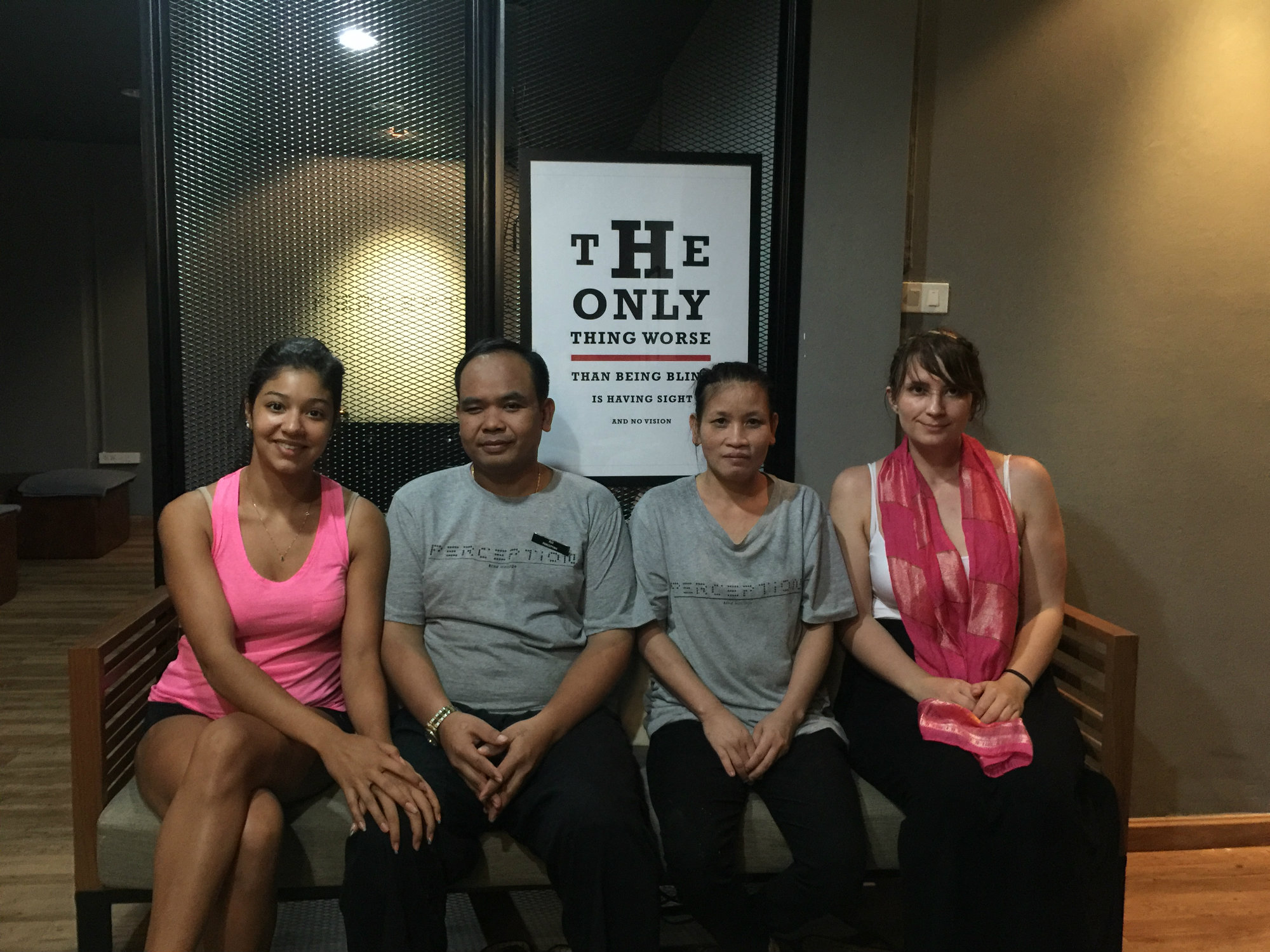 The exterior of the building is unnoticeable, very simply painted black with the sign “Perception” hanging off to the side.  Walking in a narrow hallway, and embarking on stairs that offer inspirational quotes such as “Everything we hear is an opinion, not a fact. Everything we see is a perspective, not truth” painted on each step leading up to the second floor. Then I am faced with a classy glass door, out of respect you take off your shoes as you enter the establishment.  The dimmed lights, and finely decorated interior  looked as if it was taken out of a page in a magazine. Beige walls, with a hint of aromatherapy oils wafted in the air as I sipped my complimentary tea beverage waiting for my appointment to begin.

With it’s serene, peaceful environment, it was hard not to want to fall asleep as my feet were massaged.  What made this place different was the level of professionalism by the staff and the owner, they truly want to help improve the lives of their Blind employees, by offering them a safe place to live in the same building as the parlor was. The owner spoke to me personally about how she was appalled by the working conditions that the blind had to endure in Bangkok. She passionately spoke about how she wanted to change that by creating a nice, serene place for them to work in. This is truly an unique, and ethical parlor to visit in Bangkok.

I would suggest getting a tuk tuk, motorbike, or even uber to this parlor as it was very tricky to get there by sky train.  We got lost trying to find this place as it was hidden away in a corner of a quiet street. 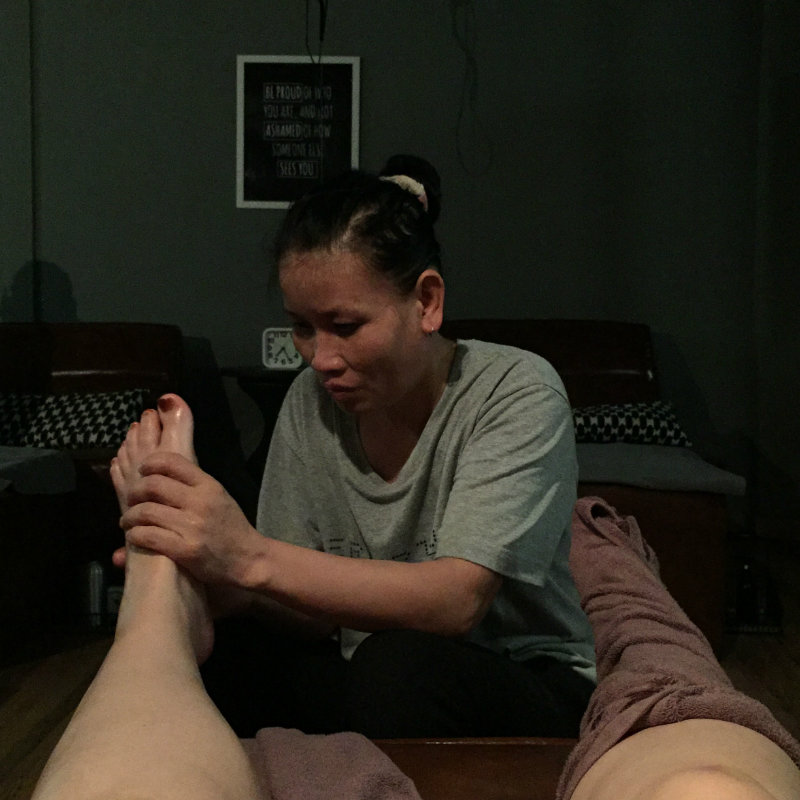 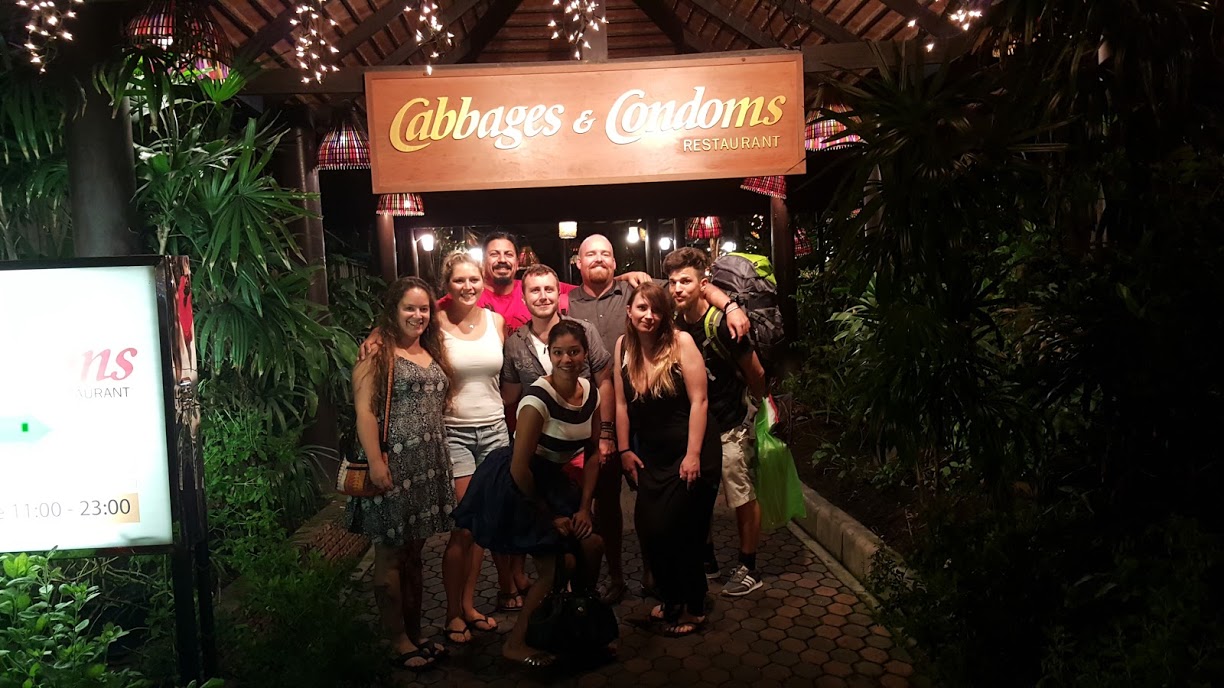 The gang at Cabbages and Condoms restaurant

Lanterns fabricated out of condoms hang overhead as you walk down the winding pathway, you are then greeted by a Santa figure created entirely out of colorful condoms, as well as a bride figure standing outside of the restaurant. Giggling, I walked past the strange figures, and the gift shops which host a wide variety of props, memorabilia, condoms and posters on the walls and shelves.  It brings out the awkward teenage self, giggling at the mere mention of sex. While the name and it’s quirky decor may amuse you,  the reason behind the theme is commendable.  The owner wants to raise awareness regarding sexual education for youths in Bangkok. His goal is to educate the population about safe sex, and to ensure that buying condoms is as accessible as buying cabbages – hence, the name. In fact the proceeds go to the Population and Community Development Association (PDA) in Bangkok.

Once you get over the initial awkwardness of facing condoms everywhere, you notice that the walls are adorned with countless article, newspaper clippings and accolades regarding famous restaurant and it’s crusade for sex education awareness. It is as if it was any other restaurant, with the occasional innuendo titles for some of dishes, and drinks such as the Blue Condom cocktail. Try the Tom Kha Gai coconut soup, with mushrooms, ginger, lemongrass and chicken – which is absolutely scrumptious. Instead of the usual mint with the bill, you are given complimentary condoms, which is a hearty reminder of what the restaurant stands for. 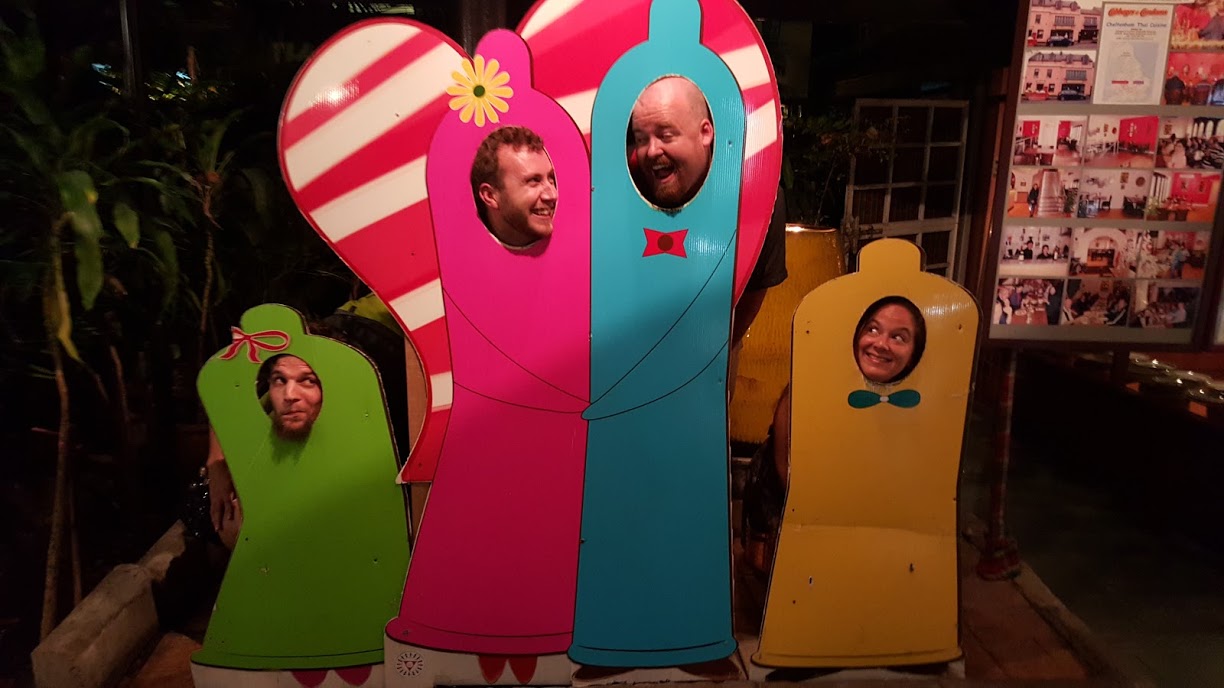 Left to Right: Dimitris, Brendon, Chris and Mica goofing off

In each city there is a quirkier, offbeat side waiting to be discovered.  Why not embrace it? What unusual things have you discovered in your hometown? Share in the comments! 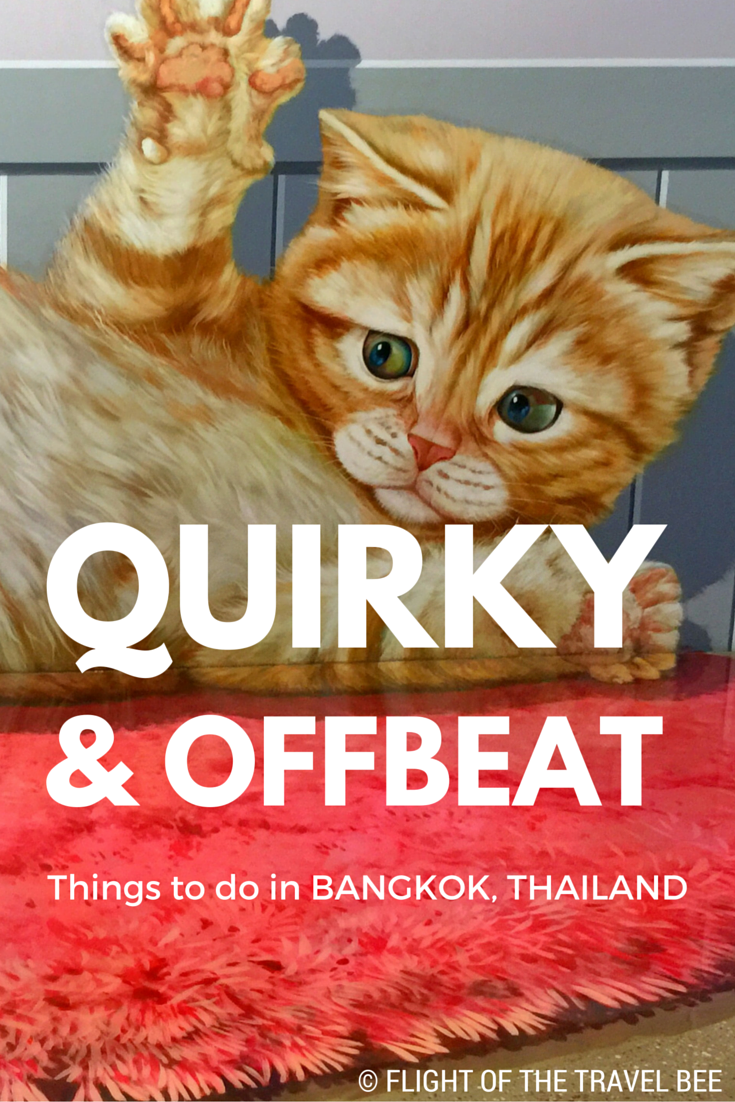