OFF THE BEATEN TRACK: CANTERBURY, ENGLAND

Approximately two hours south of London lies a sleepy, quaint, and charming town. The town was made famous by Geoffrey Chaucer in his legendary story entitled ” The Canterbury Tales”. Walking down the cobblestone streets, narrow passageways leading to another part of the town. One street after the other, you will see picturesque rivers, grassy knolls, building with a lot of character and charm. You would not think it but when you stumble upon this wonderful charismatic town, it has an dark past. Centered in the town lies an gorgeous tourists attraction, appropriately named “Canterbury Cathedral”. Ornate and baroque in nature, but it is not why tourist flock to this Cathedral in particiular. In 1170, Archbishop Thomas Beckett was assassinated by the Knights of Canterbury. The legend has it, that the Archbishop and the King had an ongoing dispute, due to the fact that the King resented that Beckett was gaining more power and control over the Church. One night in a drunken disorderly manner, he shouted out “Who here, will get rid of Thomas Beckett?!” Several Knights nearby overheard the king, and decided to assassinate Thomas Beckett in order to gain publicity and recognition from the King. The Knights marched over to Canterbury Cathedral, in the search for Thomas Beckett. Once he was found, he was beheaded. Several other monks fell victims to this gruesome attack. And the rest is history. When visiting this Cathedral, you can visit the very exact same spot where the archbishop Thomas Beckett was killed. You may ask, “What happened to the Knights? “.. It is said that the knights traveled to this cottage, a local pub, not far from the Cathedral. Apparently, a big fight broke out at this local pub, and some of the knights were killed. The river besides the cottage ran red with blood. To this day, this quaint little cottage is known simply as the “Little Red Cottage”. Canterbury will always be picturesque, charming and surprising. Walking around, I was surprised to find out how quickly I fell in love with this place. There is a old historic hospital, the Royal Museum and Free Library and there is an restaurant called Marlowe’s that is just simply divine! Simply, to sum it all up do not miss this sleepy quaint town. So follow in Chauncers Characters footsteps, and make an pilgrimage to Canterbury! 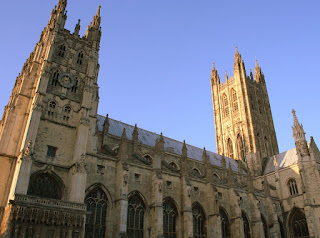 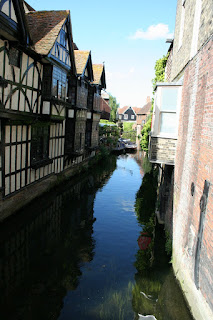